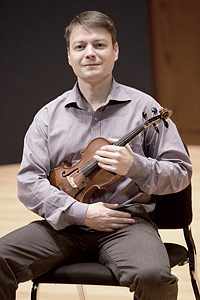 Max Buckholtz began playing the violin at the age of three under the direction Mary Cay Neal (the founder of The Buffalo Suzuki Strings) with whom he toured beginning at the age of ten to: England, Scotland, Netherlands, France, Switzerland, Germany, Italy, The Former Soviet Union and Hungary under Dr Shinichi Suzuki’s philosophy of world peace through music.

Max has worked for the Dance Department at Cornell University since the mid 90’s serving as a Dance Accompanist, Performer and Composer. He has also served as a guest/artist lecturer at Cornell University and Ithaca College lecturing and performing Jewish Moldavian, Romanian Lauteri, Turkish and Indian Music, and has advised students participating in The National String Project at SUNY Potsdam: Crane School of Music. Other appointments include accompanying dance installations in Rome, Italy and collecting Jewish Moldavian Music from Botosani, Romania with a grant from Ithaca College.

Creative collaborations include working with Indian Fulbright author and scholar Kiran Nagarkar, composing music to go along with selected readings from the book Gods Little Soldier which aimed to transcend religious misunderstandings; and composing music to accompany the poetry of Palestinian Mahmoud Darwish in conjunction with the premiere of Desert of Light written by Palestinian/Syrian playwright Rama Hayder.

In addition to his academic life Max is involved in music education and self publishes ethnic string scores through newdaymusicscores.com to expose children to the idea of multi-culturalism.

As part of efforts to preserve cultural music, Mr. Buckholtz and his colleagues have recorded music from old Roma, Romanian and Jewish people in Romania, transcribing the songs, and archiving the music.  Visit http://www.newdaymusicscores.com/ to purchase his transcriptions.

Max has participated in Master classes and collaborated with: 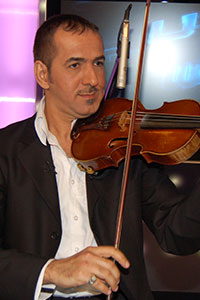 Imad Al Taha is a well-known Iraqi violinist who has performed throughout Iraq and the Arabian Gulf region. Imad is a master of Turkish, Iraqi Kurdish, Southern Iraqi and Gulf Styles of playing. He has written, recorded and performed music upon request from state leaders, including the president of Dubai, Sheikh Hamdan Bin Mohammed al Maktom, and has worked for many national broadcasting companies including the famed Hopping Recording Studios. While living in Iraq, Imad was forced to perform for Saddam Hussein, under threat of execution. When Saddam’s government was overthrown, he later found himself threatened by religious extremists who found his music offensive and bombed his home when he tried to return to Iraq. Imad and his wife and three children, are currently political refugees who first fled to the United Arab Emirates, and are now resettled in the United States awaiting a green card after 6 years of vetting with the UNHCR.

Martin Shamoonpour is an autodidactic multi-instrumentalist, composer, actor, and visual artist from Tehran. As a teenager averse to school teachers, he began teaching himself daf, tombak, flute, and Iranian folk woodwind instruments, eventually performing in galleries and theaters throughout Iran. To date, Shamoonpour has composed and performed music for close to thirty theater productions in The City Theater of Tehran and has written, directed and performed his own one-man-show, Qatinu the Hero, at many of Iran’s most prominent artistic theaters. Always looking to explore new avenues of creativity, Shamoonpour has released three experimental music albums, including 8-Bit (2014), which features 8-bit versions of Iranian folk music and Tehransaranieh, (2010, Hermes Records) which combines the “concrète” sounds of city life with ambient music and traditional instruments.  He has produced various audio art installations for the Parkingallery, Fravahrgallery, Tehran House Of Artists, and Laleh Art Gallery in Iran.  In 2015, Shamoonpour left Iran and now regularly tours the United States with Journey West, an eight-person music ensemble that performs traditional Eastern music at theaters and universities from New York City to Washington State.

Shamoonpour began acting in Tehran’s active theater scene in his twenties, appearing in over twenty theater productions and rubbing elbows with some of Iran’s most notable thespians.  His talent and humor led him to supporting actor roles in four feature-length films, including the award-winning Melbourne (2014) and Bending the Rules (2013).  In 2010, Shamoonpour relocated to Germany, where he acted in Berlin’s popular Charivari Circus. In December 2018, after moving to the United States, Shamoonpour did a two-month stay at New York’s St. Ann’s Warehouse, in the Off-Broadway play “The Jungle,” with acclaimed director Stephen Daldry.

Martin Shamoonpour holds a degree in Graphic Design from Tehran’s University of Science and Culture and creates mixed-media artworks that reflect his experience as a musician with ties to his old home, and his new.  He also creates stop-motion animations, CD artwork, and acrylic paintings as an artist-for-hire, and as gifts for friends and family. 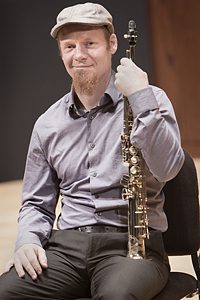 Mark Karlsen is a saxophonist and multi-instrumentalist hailing from Ithaca, NY. He has been playing saxophone for nearly thirty years, and has earned both BM (North Carolina School of the Arts) and MM (Ithaca College) degrees in Classical Saxophone Performance. He has also been a middle school band director and college music professor.

Mark’s musical exploits in Ithaca include playing many styles of music with several bands including The Hog-Tie Sessions (celtic, bluegrass and folk music of many traditions), The Temple Rockers (Jewish Reggae band with albums on Tzadik records, Solsice (Original R&B and Reggae), The Mutron Warriors (funk), and Thousands of One (Original Ithaca music).

As part of Thousands of One, Mark has been a regular performer at many benefit concerts to support various community organizations in Ithaca over the last several years, including the Southside Community Center and Congo Square Market, Ithaca Biodiesel, GIAC, The Race Liberation Alliance, Healthy Food for All, Big Splash (anti-fracking benefits held in Hector, and Binghamton NY), the Paul Schreurs memorial program, the Ithaca Free Clinic among others. 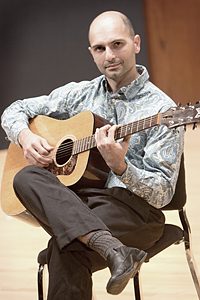 Dara Anissi was born in Tehran, Iran on October 11, 1973 and moved to the United States in 1975 as his family escaped the oppressive regime of the Ayatollah Khomeini. He began playing the guitar at age five and continued to play for the next thirty-five years, adding a wide variety of instruments and styles to his repertoire.

Dara attended the Ithaca College Music Conservatory from 1991-1995 where he received a Bachelor’s in Music composition. During this time he also studied classical guitar privately with Ed Flower. Dara is one of the founding members of The Hog-Tie Sessions in which he plays the acoustic guitar, Celtic-style mandolin, and tenor banjo. Dara also performs with The Cornell Middle Eastern Ensemble and the middle-eastern group Souk, where he plays the dumbek and oud. He also writes and performs with his own middle-eastern-influenced rock band.

Dara sees playing, composing, and exploring music as the primary focus in his life and he believes that music is a unifying force for the world. Dara currently teaches music at the Lehman Alternative Community School in Ithaca, NY. 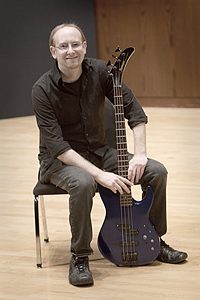 Chad Lieberman studied music composition and electronic music at Ithaca College. He plays piano, accordion, keyboards, bass, and guitar for many of the region’s best-known bands. Chad grew up in Miami, Florida, where, as a teenager, he was inspired by Cuban salsa and merengue, as well as the innovative music coming out of the University of Miami’s jazz program. These early influences fostered an appreciation for the music of different cultures as well as an awareness of the difficulties that can arise between them. In high school he formed his first band, The Hollow Men, which raised $3000 in ticket sales for the Miami City Mission, a shelter for homeless men.

Chad has performed with many notable Ithaca musicians including Hank Roberts, Kevin Kinsella, Eric Aceto and Richie Sterns. He has been an integral part of groups throughout the United States including The Jesse Jackson Group, Sha-Shaty, Big Brooklyn Red, The Aceto/Lieberman Quartet, Mectapus, El Rumbon, The Hog-Tie Sessions, and The Caribe Jazz All Stars. Chad has performed in a variety of four-star venues, from Miami’s venerable Tobacco Road, to New York City’s famed Blue Note.

Most recently, Chad spent six years as the keyboard player for Thousands of One which, in addition to touring nationally, served locally with social movements such as the Race Liberation Alliance, Trumansburg Learning Cooperative, Finger Lakes Grassroots Festival, Summertime Block Party, The People’s Garden Project and The Full Plate Farm Collective. For the past two years, Chad has been working primarily with the band Phonetix, a collective who, along with Hank Roberts, performs regularly in the New York State area.

Chad is also a published photographer and currently works as a web application programmer in Ithaca, New York. 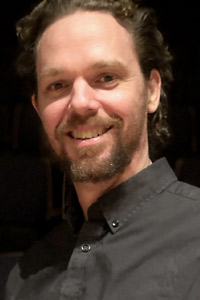 Nikolai Ruskin is a composer and multi-instrumentalist specializing in Middle-Eastern music. Nikolai grew up in the San Francisco Bay area as a visual artist and illustrator, discovering his interest in music at age 22. Upon discovering the percussion instruments of the Middle East, he began an intensive study of Arabic, Turkish and Persian traditional music, as well as classical Indian rhythms. Within one year of setting out on this path, Nikolai began teaching percussion and was soon exploring the melodic instruments of the Middle East. He is now a recognized educator on middle eastern instruments including the oud, nai, mizmar, riq, darbuka and daf.

In 2002, Nikolai co-founded the Cornell Middle Eastern Music Ensemble and was musical director of the group until 2006. He resumed teaching Middle Eastern at Cornell in the fall of 2018. 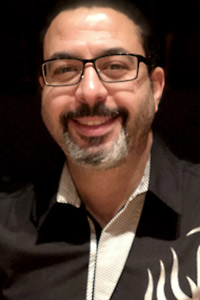 Ayman Abdalla is an Egyptian musician who has performed on Cairo’s most prominent stages, including the Cairo Opera House, Sakyit El Sawy, and The Citadel’s Festival. The Arab spring precipitated his relocation to the United States where he has settled in teaching the Arabic language at Colgate University. After political upheaval, Ayman turned his attention to teaching Arabic as a foreign language. However, forever a musician, he has been utilizing music as a tool in teaching the Arabic language. Currently, Ayman is teaching Arabic at Colgate university. He continues to play music with several groups, including student groups on campus