The Mission of Journey West is to celebrate diversity while providing an exciting musical and educational experience for our audiences. Journey West donates 5% of their income to the United Nation High Commissioner for Refugees and the Edward Said National Conservatory of Music

Journey West began performing in 2011 and started incorporating refugee musicians into the group in the spring of 2016 when they toured Belgium, deep in the midst of Europe’s refugee crisis.

Their percussionist was unable to make the tour, and rather than bring someone else from the United States, the group aimed to find a refugee in need of work in Europe.

Fortunately, Max Buckholtz discovered the project Muziek Publique which is based in Brussels and works with refugees and other international artists.  Muziek Publique put the ensemble in touch with Syrian refugee, Firas Hassan who had traveled Western Europe looking for work and had refugee status in Belgium.   Journey West was fortunate and excited to have Firas on percussion for their first official tour in Europe.

Touring Belgium was a daunting experience for the group.  The Brussels airport and metro system were both bombed on March 22 and the band’s flight was due to leave on April 22. Their tour was uncertain: flights in and out of Brussels were frequently being canceled. Due to the circumstances, it was unclear to gauge how audiences would react to our material, or if we would even have audiences due to the fearful atmosphere after the bombings. Our promoters and venue owners warned us of the unpredictability in the number of people attending live performances.

During our tour, Firas was constantly working on changing his refugee immigration status in Brussels. Fortunately our tour went without incident and we had many successful performances, thankful audiences, and made many connections among audience members, musicians and concert halls.

Once our tour was complete, Firas began a job at the Popakademie in Mannheim, Germany and later went on to work with Yo-Yo Ma’s Silk Road project.

Journey West’s current seven-musician lineup is, in-part, a reaction to the initial travel ban that was instituted at the end of January of this year by the United States. This legislation was especially upsetting to Max, who immediately began calling refugee centers in New York and Pennsylvania to try and accommodate refugee musicians looking for work. 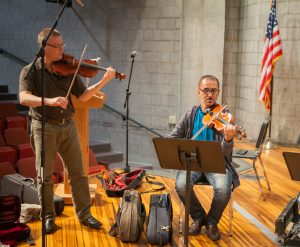 Max also felt a need to bring awareness to the general public about the experiences of refugees living in the United States, and to offer opportunities to those without an outlet for their talents and cultural expressions.

In January, while meeting with event organizers for a potential concert at Hamilton College Max met with Hana Selimovic who volunteers her time at the Mohawk Valley Resource Center for Refugees.  Hana put Max in touch with Imad AlTaha, who had at one time performed for Saddam Hussein, and was well-known in Iraq and throughout the Arabian gulf.

Imad and Max met several times and played music together, with Imad expressing interest to perform with Journey West. Over months of a developing friendship, Imad opened up and shared many of the difficult circumstances he has been through. From fleeing Sadam and religious extremists, to and extensive career in Dubai, we continue to grow closer to Imad every time we meet.  Imad was featured at the round table discussion at the Society for Ethnomusicology’s national Conference held in Denver in the Fall of 2017.

Journey West is proud to help sponsor Nael Karam as part of the Edward Said National Conservatory of Music Education Program in Palestine.

Faris is a 14-year old talented Qanun student. He is currently on his 4th level. He has shown commitment and he worked hard since he joined the conservatory in 2011 to develop his music skills. Faris now participates in the weekly concerts and the Conservatory concerts, festivals and events. He is pursuing his music education with passion. He is planning to finish the eighth level to graduate with the intermediary certificate which qualifies him to pursue higher music education in the future. He looks forward to participate in regional and international music concerts and events.